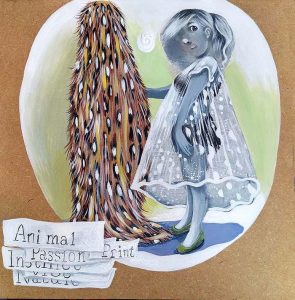 The Text and Visual Image 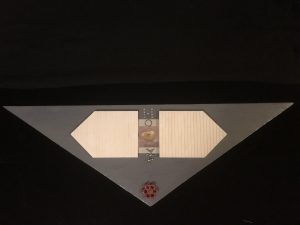 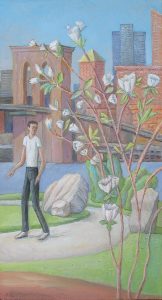 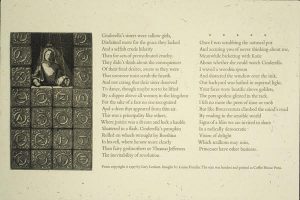 The fruit is all bold brushstrokes

& negative space in an organized line.

the heft of each surprises. Winter lasts

longer than one wants. What is omitted

in those thick art history books —

place them in bowls of rice, to keep 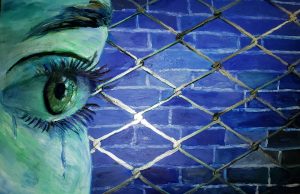 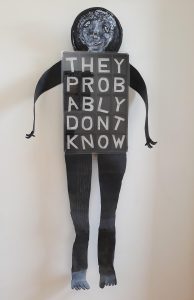 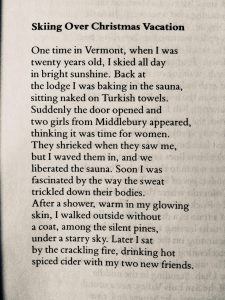 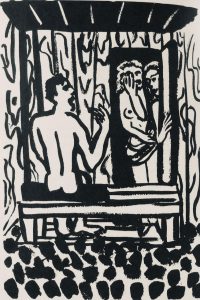 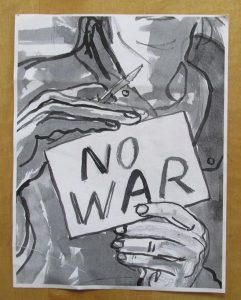 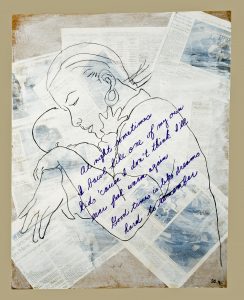 Susan Grabel – Sometimes I Bawl – collage and drawing on masonite,

Work up a sky first: purview a few

watercolors bleed half to death.

a trail into the woods. Two runaway children

pluck up animal tracks one after another,

each track faster than the last, so the two

can’t help stuffing themselves all the way to the lair.

There, pigments compound the telling

details until you have disappeared.

But by a worldly demeanor self-

evident around them, the children together

can’t yet get lost. The lesser-loved

of the two (by the other) looks like an adventurer:

the sister or brother (or neither) may sulk & dither

until the nicety-brush, three sable hairs, will fix

them both mannerly at a wooden table, their faces

reflecting in bowls of yellow broth, but I can’t

any longer distinguish their eyes in the steam. Flavor

of marrow rises & strays towards a glint of weather

the windowpane stops: No weather allowed in here,

you, you. Now even the children’s names can’t call.

Can’t call: even if the artist designed

herself the kitchen clock’s cuckoo next,

she couldn’t summon its twit to change her mind.

Martha Zweig  – BY WAY OF ILLUSTRATION 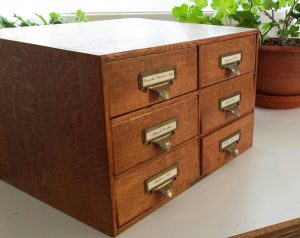 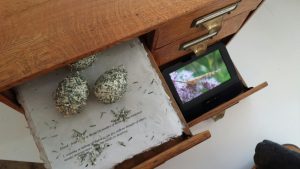 Kathryn Lipke – From the Meadows Edge 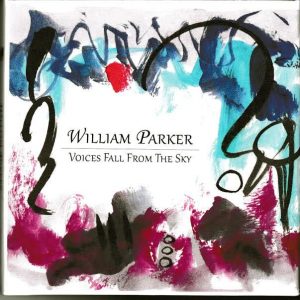 requested by William Parker for his boxed set of 3 CDs, “Voices Fall from the Sky,” Centering Records, 2017 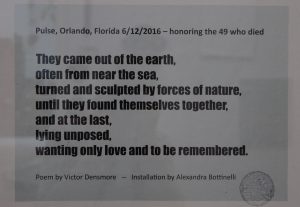 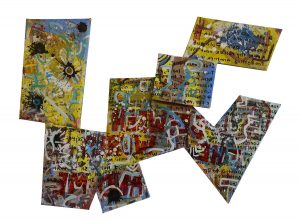 Barry Mason – Say it Loud 5 – Between The World and Me

The Text and Visual Image

Notes on the exhibit by Sam Thurston

A visual image which follows a text is the most common. Consider all the depictions of Bible stories, myths, novels etc. that recast text into visual form. For many centuries in the West I bet half the paintings depicted a text. In this ‘show’ only a few artists followed this route, the most descriptive one being Janet Sawyer’s image on the poem Skiing Over Christmas Vacation by Kenneth Gangemi.

The reverse of a visual image that follows a text is a text or poem that considers a visual image. Sarah Audsley’s Six Persimmons does this. Like most poets, she does not just describe.

Alexandra Bottinelli’s sculpture Pulse was exhibited with a similarly expressive poem by Victor Densmore. It is a collaboration, done the year of the Pulse Nightclub massacre in Florida 2016. Words and image are related – but one not the cause of the other – rather both ‘caused’ by a horrible outside event, a ’text’ of sorts.

Probably beginning with Cubism, Western artists started using words both as descriptive markers and as plastic, abstract elements in the composition. This is a common use today. An extreme example is Barry Mason’s painting Say it Loud 5  – Between The World and Me where you can hardly read the words as they are backwards and fragmented; they act as brushstrokes, not as bits of meaning.

More often words in visual presentations retain a subjective meaning, as with Michelle

Lysak’s assemblage HOME. The mind looks for a connection between the word HOME and the image, creating a tension.

Another example where the words are charged, but you may be unsure what they have to do with the image is Nola Romano’s Animal. When the words are political there is little doubt. Marjorie Kramer’s No War is a good example. Another variation is when the words are used more as conceptual elements than as plastic or compositional elements as in Kathryn Lipke’s From the Meadows Edge.

One of the least obvious poem-image connections is Martha Zweig poem By Way of Illustration: instead of thinking of the poem as something that talks about a specific image she gave us a poem that considers the idea of image. Another person who ‘went off the page’ is Lois Eby who wished to extend my idea to include her image illustrative of a particular track of music.

Many thanks to all the artists who contributed to this project. I apologize for not mentioning everyone.