Greater Barton Arts (GBA) began in 2014 as a meeting of artists and arts supporters to consider how to form a cooperative gallery in Barton. That summer they
organized two “pop-up” galleries for local artists and artisans in space loaned by E.M. Brown & Sons. The community response was enthusiastic. Some artists had never shown their work before. GBA also held a plein air “paint in” in September of 2014.

Encouraged by community support, GBA formed a non-profit corporation organized under the laws of Vermont and recognized by the Internal Revenue Service as a tax-exempt organization under section 501(c)(3).

In subsequent years GBA has raised funds for the Frontier Pope Memorial Animal Shelter, Barton Public Library, and the Crystal Lake Fall Historical Association and Museum through Paint ‘n Party and Art for Animals events. (see About Us tab for photos and details on all these activities)

In addition, GBA has held many free art camps for kids and art classes for adults and seniors. And we thank the Vermont Community Foundation for grants that helped us to keep them free.

In 2017, with a grant from Community National Bank, GBA purchased the equipment and supplies of John Rowe’s framing business that was closing in Newport at a substantial discount. Thanks to CNB’s and John’s generosity, we’ve been able to stock our frame shop in Barton for the benefit of artist co-op members and offer retail framing services to the community.

In 2018, GBA acquired a lease with an option to buy 396 Main Street, an 1843 building in Barton’s Historic Village District, and the purchase was finalized in March of 2019. This previously vacant structure provides a home for GBA’s activities and more. Our plans include gallery and classroom space, room for a café and coffeehouse with performance space, the frame shop, a silk screen operation,  a public access tv studio in cooperation with NEK 15, housing for resident artists, a small gift shop and information center, with free wi-fi and a cell phone repeater that is up and working already. 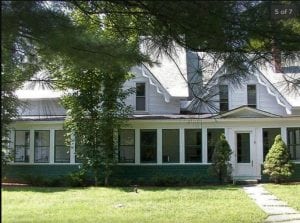 The rain held off till the very last minute Sunday afternoon as members of the Clan of the Hawk performed cleansing and blessing ceremonies on the site of the new Greater Barton Arts Building at 396 Main Street in Barton.  The gracious old home, once owned by a prominent banker is well on its way to being transformed into a Northeast Kingdom hub for many of the arts.

Board Member Ed Helm assisted Clan of the Hawk Fire Keeper Stone Tree in digging a small temporary fire pit. Stone Tree had brought wood from the Clan’s grounds in Brownington for the fire. As Stone Tree lit the fire, Clan Mother Crowfeather, Donna Huether and Assistant Chief Wolf Howling, Dan Duhaime smudged the exterior of the building by circling it with the protective smoke of sage.

Several windows in the Arts building were opened to allow the smoke from the blessing fire to be drawn inside. A ring of visitors sat in chairs around the fire.

Thunder Bear and Wolf Howling explained the use of herbs in the ceremony: Sage to clear bad energies or spirits, sweetgrass and cedar to draw in good energy, and traditional tobacco to be given as a sign of respect and to be offered when asking for help, guidance, or protection.

Bits of cedar and traditional tobacco were passed out to everyone in the circle so they could say a prayer as they dropped the herbs in the fire. The cedar crackled and sparked when it hit the flames and Wolf Howling said this would send the prayers up to Great Spirit.

Crowfeather did a traditional ceremony of the four directions, thanking the spirits of North, South, East and West for their blessings and asking for protection from them for the Arts Center.

Finally, Crowfeather and Wolf Howling smudged the interior of the home. They carried large sea shells with smoldering herbs throughout every room, asking Creator to bless and protect the art center and all who would work and play there.

Just as drops of rain hissed in the fire, two of the founders of the non-profit, 501(c)(3) organization, Adrien and Ed Helm, invited everyone inside for light refreshments and tours of the building.

Though a work in progress, the center is already showing signs of promise. Some rooms have been fully restored. Many of the old fashioned door and window moldings, floors and cabinetry are intact and lovely.  Its spacious rooms and aura of yesteryear make it a charming and inspiring place to be.

Plans for the center include a regular schedule of classes and workshops, a public access TV studio, an art research library, gallery events and much more. An AmeriCorps volunteer is with them this summer to give computer classes. More information can be found on Facebook at Greater Barton Arts or by contacting Adrien at adrienhelm@gmail.com.